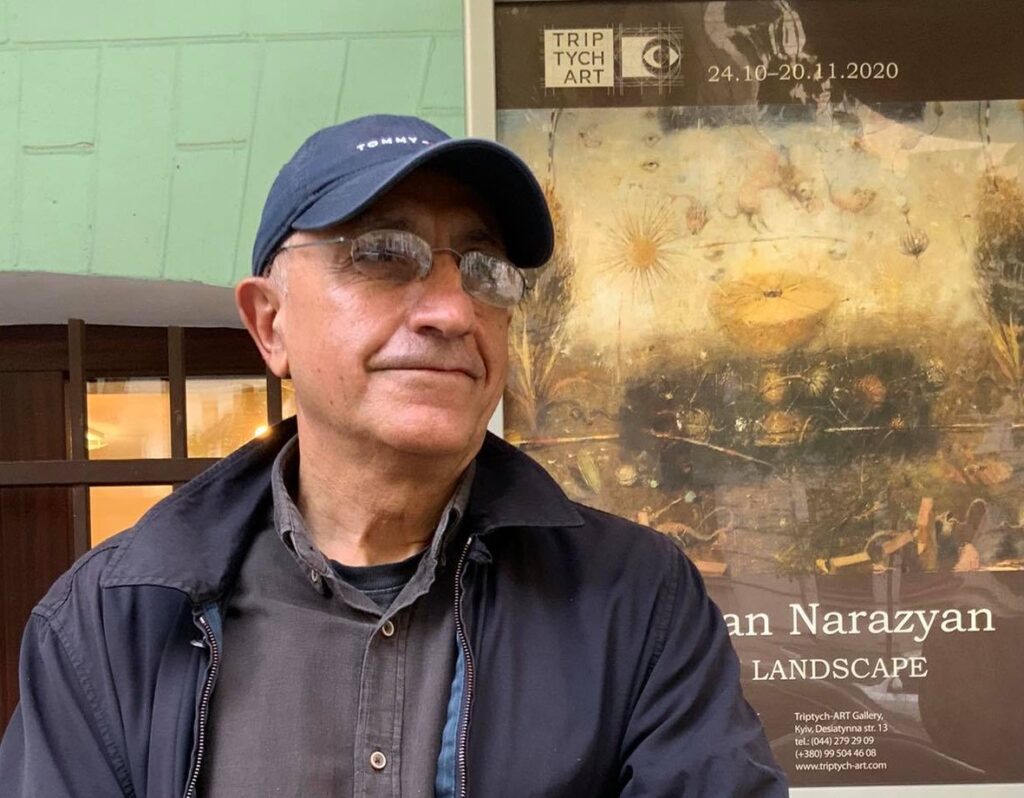 Vachagan Narazyan is among the non-conformist artists to come out of the former Soviet Union and is among the most magical and ethereal in style.

Delicate paintings by Vachagan depict ghostly dream-like scenes in a mysterious, translucent world. His looser touch and flecks of startling, vibrant colour betray motives far more complex than stately portraits or straightforward narrative painting. His figures, familiar and logical at first glance, are altered and mechanised, distorted and sometimes violated on closer inspection. Some appear ghostly and barely tangible while others are very much present and solid, blind folded, clambering and often oppressed in some way. Less like actual human forms or individual representations, his figures are representations of states of mind or experiences, like spirits or ghosts. They elegantly fuse imagery we recognise as being from a distant past with concerns that illustrate elements and concerns of what is happening today.

Having been trained in a classical style that focused on realism, Narazyan chose instead to paint from a more subconscious point of view. His painting style and subject matter deviated from the dogmatic environment from which he came and this is reflected in his political views as he disagreed with the conformist ideas of Stalin. The group of artists, known as the non-conformists and of which he was an influential and prominent member, was illegal under Stalin who dictated that artists should only create art that served the state and showed it’s people working hard and being happy. This manner of painting was enough to put his own and his family’s lives in danger by defying the rules of the state and he survived by selling his paintings in America where his oils received wide acclaim.

His work incorporates elements of reality and encodes this into symbolic visions of a deeply personal nature in which the faces of each subject reveal the feelings of the artist, both expressive and subdued as was the nature of his freedom of expression in the past. Often recording hazy childhood recollections, Narazyan’s intention is to immerse his viewers in the settings he describes. His blurred, sumptuous backgrounds , like Turner’s skies, contrast beautifully with particular, sharp and precise mark-making and guide the eye through each painting fluently with occasional bright ‘lifts’ with splashes of vibrant colour in the underpainting.

A true rebel and brave representative of freedom of expression, Narazyan creates work that entrances and hypnotises his artistic audience and defies the social restraints that oppress his country.

1972 – Born in 1957 in Kislovodsk, Ukraine.
He graduated from Kharkiv Art and Industrial Institute.
In 1981-1993. taught at KhKhPI, now Kharkiv State Academy of Design and Arts. Since 1984 he has taken part in republican, all-union and international exhibitions.
The works are stored in the funds of the Union of Artists of Russia and Ukraine, in the funds of the Ministry of Culture of Ukraine, in the Kharkiv Art Museum, Zimmerli Museum (USA), Museums of Contemporary Russian Art (Jersey City), Kharkiv City Art Gallery, private collections in Ukraine, Russia, USA, Germany, Israel, France, Poland, Canada, Yugoslavia, Austria.
Lives and works in Kharkiv.

Member of the Union of Artists of Ukraine.