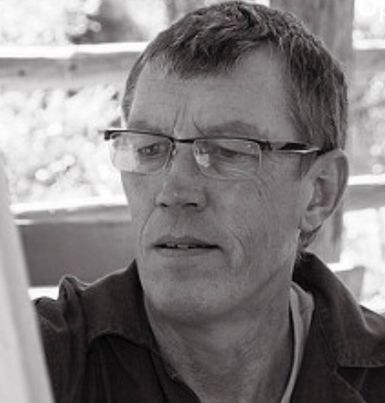 Russian artist Alexander Kruchan was born in 1960 in Ussuriysk, a city in the Far East on the border with China. He received an art education in the south of Russia, at the Kuban State University. He lived in the city of Yeisk on the coast of the Sea of Azov and worked as a teacher. Alexander is now a freelance artist living in Slovenia. His work is based on high quality realistic school, he is a master of the highest level. His portraits are precise and subtle, psychological, and attentive to nature. Still-lifes attract with rich materiality, tell about the generous nature of the south. The lyrical landscapes seem to convey not only colour and air, but also sound – the rustle of warm sea waves, the clang of the iron boards of small boats, the creak of old pines. Alexander is equally good at painting and drawing, his talent is evident even in the small, quick pencil sketches. Alexander Kruchan’s attractive feature as a person and an artist is his thoughtfulness and philosophical, spiritual attitude. It seems that it is not enough for him to convey just an external resemblance of a model or a landscape, because technical skill is enough for that.He peers into the depths of what is happening and searches for hidden stories to tell them to the viewer, to uncover the big through a small fragment. Alexander’s art also includes surrealistic, mystical paintings with allusions to ancient history and biblical subjects. And these are also stories: of wise old men, beautiful women, the impregnable walls of ancient cities, mountain and life trails running into the far horizon.And Alexander Kruchan creates book illustrations. He makes interior paintings, both secular and religious, in Russian Orthodox churches.